Flashback post: The reality of a grilled cheese sandwich 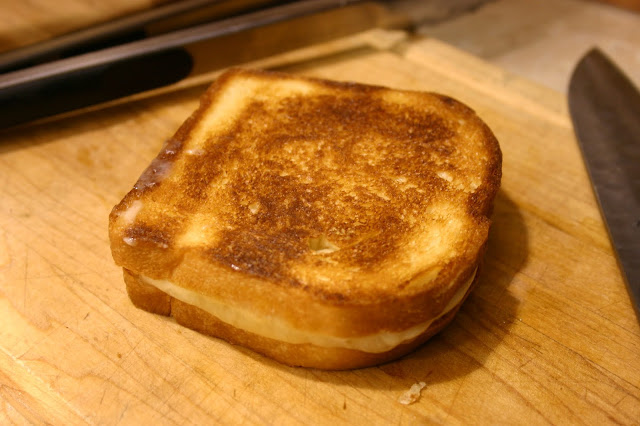 I've got a beef this morning. A writing beef.

I'm reading a book, the last in a pile of three that I began and then threw to the side. I may have to ditch this one as well if it doesn't cut it out.

This time it's a problem with details. The author seems to just make things up without bothering to see if they actually make sense. One of the characters is a baker, and so there are frequent references to baking processes. But the author isn't particularly concerned if they are correct. Here are a few examples.

In one case, the baker can't be interrupted because she is kneading. A few minutes later she comes out saying that she finished the tarts.

PROBLEM: There is no kneading required when making tarts. They use pastry crust.

Later on, an assistant complains that there is something wrong with the buttercream frosting she made. The baker tastes it and proclaims that the egg whites were bad.

PROBLEM: There are no egg whites in buttercream. Or yellows for that matter.

Another detail violation happens in a bathtub. The protagonist is soaking and enjoying a plastic water tumbler of Chardonnay while musing about her terrible life, and then describes a loofah getting snagged on her leg stubble.

Perhaps if you had very course, very curly, very long leg hair there might be a Velcro effect. But stubble? Stubble sticks straight out. It's not snaggish. It won't run a pair of pantyhose let alone slow down a sponge.

Are cooking references really such a selling point that it doesn't matter if they make sense? Is there such a rush to go to press that editors don't pay attention to what they are reading? Was this story the second piece in a two-book deal with a very short deadline?

I'm trying to figure it out, hopefully so I can learn by negative example. Perhaps this is similar to what artists try to teach; to draw what we actually see rather than what we think we see. This author is writing what she thinks leg loofahing is about, without actually getting in the tub and testing it. Or even imagining through recollection. It's like the story is running merrily along and she captures it, thinking leg hair might be amusing, so down it goes and in it remains.

On the plus side, I guess I have learned something. While writing details, I need to really be in the scene. If I describe making a grilled cheese sandwich I need to actually walk through the process, at least mentally. The butter has to be spread. The cheese has to be unwrapped. I'll need to remember how the toasty bread lifts up like butterfly wings and the melting orange oozes over the edges if I cut it too soon and too hot.

I've learned that I need to really live the darned sandwich experience rather than assume I know what it is and say something nonsensical.

I guess I won't throw the book across the room. I'll continue reading, and see what else I can glean.

And now, I'm ready for lunch.