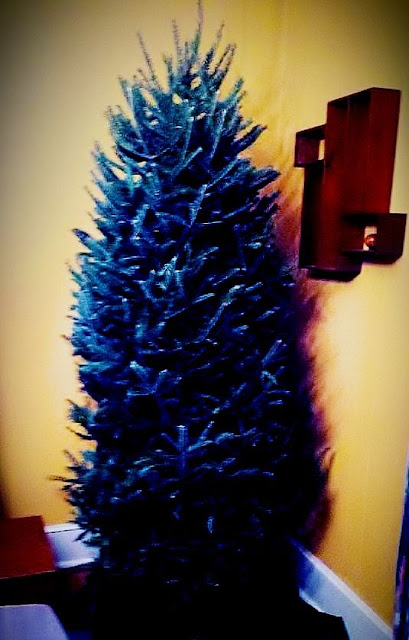 This is our Christmas tree, and no, we aren't getting ready to drag it out to the curb. It's been naked and waiting since the day we bought it.

I had a vision of decorating it Christmas Eve, the way they did in Ye Olden Days, when the twinkling lights adorning the branches were candles and the risk of fire was significant. Back when Christmas began rather than ended on December 25th. It's a vision I've entertained for decades; a romantic notion fed from books by Laura Ingalls Wilder and Charles Dickens. My darling Dolce puts up with my fancies and was willing to try the Christmas Eve thing this year.

He didn't want a funeral, so there was nothing to do but sit with the news.

Dad was also romantic, though his ran in the style of Henry David Thoreau. Many of my childhood memories are the result of the restlessness his heart experienced. We moved a lot and jobs were transitory. For a while, we lived close to the land in a one room cabin with no running water. I learned about hunting for hickory nuts there, and what wintergreen leaves look like, and how to keep picking black raspberries despite the scratch of thorns. I learned to be careful when chewing a mouthful of squirrel because you could break a tooth on a stray piece of bird shot. I also learned how to appreciate oddballs, like the elderly hoarder up the road who let us fill our metal milk can with water from the pump in his front yard. His name was Charlie Parker. Chickens and ducks clucked out of the way when we drove up, and a pack of basset hounds bayed their warning hellos. Charlie Parker showed my dad how to stir together a simple dough and bake bannock in a cast iron skillet over an open wood fire. Dad made the bread just once. The bottom was burned, but he was proud.

He didn't want a funeral, but Dad said he'd like his ashes scattered there on that mountain where my parents argued while deer mice made nests in the belongings we stored in a shed not far from the outhouse.

A few years later, my Dad moved out. The end of the marriage was swift, and shocking. My mom, brother, and I had to move into low-income housing, which meant giving away our beloved dogs. Mom was a wreck for several years. I stayed away from home as much as I could, hanging out with my boyfriend and getting up to no good. Mom's family lived on the opposite coast, and we had no contact from dad's family, so connection with cousins, aunts, uncles, and grandparents was lost. Although he moved a few states away, Dad tried to stay in touch. I have an old scrap book containing letters from him during those years. But human nature made it easy to turn him into the villainous cause of all our suffering.

Dad didn't come to my wedding in 1986. I never asked him why, and of course now it's too late for questions. I imagine he avoided it out of guilt and shame. I'm beginning to think they are the most corrosive emotions; infections that fester and deepen unless they're lanced so light and air can stream in. I forgave Dad decades ago for my childhood pain. My brother's had a harder time doing that. Since then I've inflicted damage on my own children, and understand better what it is to be immobilized by guilt and fear of rejection. My heart hurts when I think about the possibility of Dad suffering those emotions for fifty years.

Facebook allowed my dad and I to reconnect in a way we hadn't previously given the distance of geography and time. With Dolce's encouragement, I also connected with his wife and daughters. It's fun to have sisters, and I'm grateful to have a wise, witty, protective stepmom. I'd hoped to visit them one day. We'd be a gaggle of girls around the old man my dad had become. It's clear that Dad was a better father to them than he was able to be for us.

December dwindled while I processed the reality that he was gone, along with the chance to be part of that gaggle. Christmas Eve arrived. Dolce and I still intended to decorate the tree that evening, but it was a hard day. Tears welled suddenly even when I wasn't thinking about my dad. We passed time with books, television, and me crying periodically. The tree stood waiting, tall, and a bit too slim in the hips. A sentinel and a symbol; waiting but not demanding. Sharing space with us; a green reminder of Christmas with all it's loss and promise.

It still stands waiting, on this, the seventh day of Christmas. It will wait with us, naked and brave, for five nights longer. After the day on which we celebrate the magi's arrival we'll carry it out of the house. If we lived in the country I would drag it to an empty field and set it ablaze. If we lived on the water I would put it in a boat, putter out to the deep, and watch it sink and settle to become a sanctuary for fish. But we live landlocked in the city limits of a small town.

I think I'll lean it in a corner against the garage so birds can shelter when the winter winds blow. I'll watch it lose it's color and vibrancy, losing the fight of days marching until its death is no longer arguable. And when the tree is even more naked, once the needles are gone and the wood is dry, I'll cut it into pieces. I'll use the tree to make a fire. I'll bake a round cake of bannock. It will probably burn on the bottom. Dolce and I will lift a glass of something, and I'll sift through the mix of memories and tell her some happy ones; of the taste of a turkey shot behind our cabin, and the sight of a rusting model A Ford in our driveway, and of the scent of gun oil and home-rolled cigarettes.

The stories will mix with the scent of baking bread and burning wood, and the tree will become a part of the story of my dad and I. A sentinel to the unique thing that was us.