Hot off the presses! (Let's get some shoes.) 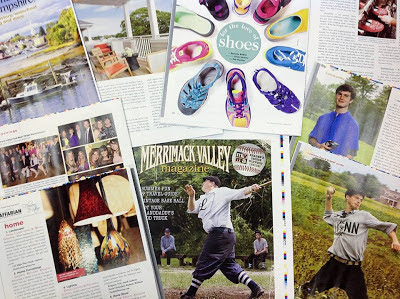 It shows some of the pages of the July/August issue, which includes my first Little Bitz pieces along with a story about traditional shoe stores in the valley.

Check out the cool shoe photo that the talented Kevin Harkins took at Pennyworth's in Newburyport!
Posted by Suzanne Marie DeWitt at 4:59 PM No comments: 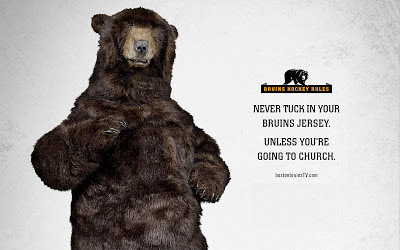 Since moving to New England, I've worked hard at becoming a sports fan. It's never seemed optional, really, more like a moral imperative which didn't seem to apply in Western New York. There you really only have to worry about football, and I was tucked a safe enough distance away from the Bills to be shielded.

In Massachusetts its another story. You don't really get a season off. Enthusiasm is a year-round requirement.

I've been trying to get on board, submitting to games and making appropriate sounds at what seem to be appropriate moments.

But it hasn't been until this last week that a beam of light broke through the testosterone reeking clouds.

The cause? Hockey playoffs. I think I finally found my sport.

Football is frustrating. The action stops so frequently and for so many far flung flag reasons that the excitement gets snipped just as it starts to build. And I can rarely figure out why.

Baseball is easy to follow. The rules are straightforward. You know what's going on, because all you really have to pay attention to are runs, strikes, and who's on first. But frankly, it can get pretty boring. Especially with good pitchers.

Basketball I haven't had to watch. Yet. So I'm pretending it's not really a thing.

The rules seem simple, so I don't get too confused: get the puck in the goal, and don't fight (except a little to keep the crowd's blood pumping). Plus there is always something to watch! The puck flies around so fast that it takes a lot of attention just to keep your eyes on it. It's exciting!

Hockey. It's a relief to have found you. I no longer have to feel like a fraud.

Oh, and the bear?