If they could just get the bodies out less war torn, they'd make a heckuva lot more moolah. 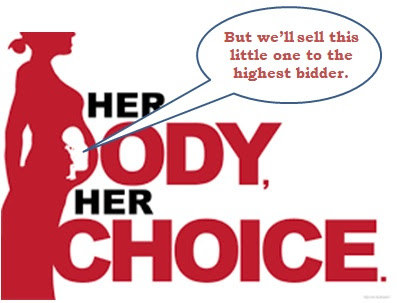 For the past few weeks I've been debating whether to post about Planned Parenthood's trafficking of baby body parts. Calling it "fetal material" might make you feel better, but watch the video below, which shows eyeballs being pushed around in a dish with a PP technician asking about their market potential, and see if you can maintain your intellectual distance.

(If you have the stomach to watch more videos from the undercover investigation, go here.)

I know about abortion first hand. It's something I'll regret until my death and maybe even afterword. Because of that knowledge, I spent a few years with an organization called the Women's Health Collaborative which focused on collecting and distributing information about the seldom discussed risks and side effects of abortion, and the darker side of the abortion industry.

It is, in fact, an industry, making oodles of money in multiple ways, one of which is selling body parts.

In theory and by the letter of the law, compensation is supposed to be purely expense-based for organs and tissue. But this video and others that were filmed as part of this investigation show that what's being discussed is a profit center. It's not unlike the compensation offered for egg donation, with companies aggressively pursuing female college students who are prime candidates both egg-wise and financial-need wise. Do a Google search for "donate eggs" and you'll see what I mean. Young women are offered up to $10,000 for a single harvest. The term "payment" will never be used, because that would be illegal. Officially, girls are "donating" and being "compensated" for that donation.

But potential babies aren't the only profitable market. Dead babies are also money makers. As the videos show, abortion clinics can expect $200 for a single viable organ. With proper training, and perhaps modified procedures, abortionists can get bodies out more fully intact, so that the brain, heart, thymus, kidneys, and yes even the eyeballs can all be sold to companies like this one:

StemExpress' home page describes it as a multi-million dollar company which provides fetal and adult tissue and promises privacy for both its donors and its customers.

As the Planned Parenthood official discusses in one of the videos, payment would need to be based on a per specimen model. Illustrations would need to be provided so that they would know how much they were going to make on each mutilated child, and could focus on maximizing profits.

The actor in the video points out that in the case of eyeballs, customers are looking for those that are more fully developed. And of course larger organs should earn more than smaller, younger ones. So is it any wonder that there has been such a fight against restrictions of later term abortions by the National Abortion Federation and related organizations? Doesn't the diggety dang government realize the profit potential they're impacting?

These appalling videos aren't getting much air time in the mainstream news, but that doesn't mean that Planned Parenthood isn't already lining up their apologetics. They've already used the "It's only compensation for our costs" falsehood. So what will they come up with next?

The only thing I can think of is the argument used for justifying embryonic cell research: "As long as these lives are being lost, why not give them some value"?

But of course they can't use that argument, because it would mean admitting that these tiny, war-torn* bodies, are in fact lives.

*"War-torn" is the phrase used by the Planned Parenthood doctor who probed around at a dish full of body parts.