Watching over the scent of honeysuckle 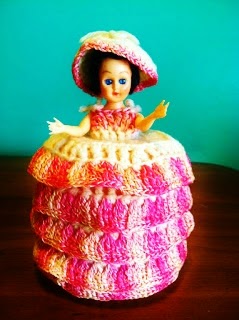 We did a lot of driving when I was a kid. We went to visit a grandmother, a great grandmother, some aunts and great uncles, and various friends. The trips weren't very long, but they were frequent.

A few times we stopped unannounced to visit a friend of my Mom's. I think they worked together at an old folk's home before Mom had to quit due to heartbreak. We'd pull in the driveway wondering if they'd be home. They would invariably welcome us in, and we'd stay for a few hours.

I'm not sure what my brother David and I did on these visits. I don't think other children were present. I don't recall much about it, actually. But I do remember the bathroom.

The bathroom was bright and modern, especially compared to the room dedicated to the same purpose in our own house. We lived in an old place purchased from a pair of Victorian sisters, a sort of urban farmhouse of the era. It was set in a neighborhood rather than farm country, but it had a huge back lot on which several apple trees, a plum tree, a grape arbor, strawberry plants, and blackberry brambles were drifting into wildness. The sisters left a crank telephone on the dining room wall, a wonderful enameled hutch in the kitchen, and a toilet positioned in a tiny closet space. I have no idea where the elderly girls must have bathed. Perhaps they heated water on top of the stove and poured it into a galvanized tub.

We moved the toilet into the adjacent room which had once been used as a bedroom, and installed an old fashioned claw-foot tub. The only other thing in the large room was a closet, but it wasn't just any closet. This closet was a place of seething life. A place where puppies were birthed, and where a multiplication of mice once broke out of their overfull Habitrail and scattered throughout the house.

The room was dim with age-browned wallpaper and a dark linoleum carpet. A picture of an angel by a pool in a garden of peonies hung near the sink.

In contrast, the bathroom of my Mom's friend was small, and tiled, and bright, and scrubbed. It was like visiting a foreign land.

Two things are vivid in my recollecting. The first is a creature standing sentinel atop the tank of the commode. She was an odd sort of watchman, dressed in a picture hat and an ankle-length hoop-skirted gown. Her eyes were glazed from the tedium of the assignment, her arms stiff from maintaining her erect posture.

I couldn't not touch her. I had to pull her up out of the confining tube and make sure she had legs. They were there all right, unbending and rigid like her arms. Santa had recently delivered my Malibu Barbie, who's long shining hair hung straight as a curtain. But this doll's hair was spun from ultrafine strands, like the flossy artificial snow you carefully stretch across the branches of a Christmas tree. She was much lighter in weight than my Barbie. Hollow. Insubstantial. Somehow less-than.

Once assured that the legs were there, I would slip them back into position and fluff up the many layers of crocheted skirt to cover up the paper roll, hoping that our hostess wouldn't notice that the doll had been fiddled with.

The other thing I remember about that bathroom was the jar of Avon Honesuckle Cream Sachet that was displayed on an open shelf. I'd unscrew the lid and sniff in the defining scent of this place and these (now) faceless people. It was foreign and exotic and cloying. I could never quite figure out if I liked it.

None of these things exist anymore. Not toilet paper dolls or cream sachets or simply dropping by unannounced. Now we text first, tuck extra rolls of tissue in rustic woven baskets, and buy our scents from Bath and Body Works rather than Avon.

The world has moved on.

But in my memory, she still stands there, that Southern Belle of a not-Barbie. Waiting for me to come back, and keeping watch over an era.
Posted by Suzanne Marie DeWitt at 12:43 PM