Dear Wally: It's me. A judger. 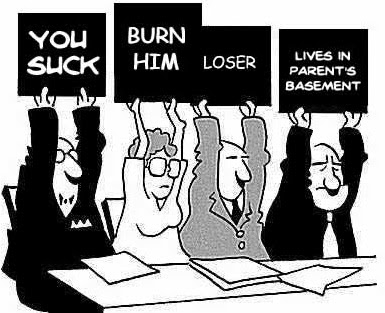 I had to slap myself mentally yesterday, and I hope Wally Lamb would be proud of me for it.

Our neighbor is an outdoorsman of sorts, if you can call someone who putzes around in a bus-sized RV outdoorsy. It is a tan behemoth with dull stripes of brown, worn out by the miles and too many hours in the sunlight. He parks it parallel to our back fence. Once while working in the yard I looked up to see him sitting in the driver's seat, eating a sandwich. I imagine it to be peanut butter and jelly. I looked away quickly, embarrassed at catching him in what felt like an intimate moment. I glanced covertly back a few minutes later, but a curtain had been drawn across the windshield. I didn't know they made those things. Perfect, I suppose, for blocking the sun's rays or probing eyes.

In good weather he periodically pulls the RV out and takes it for a drive. The skyline looks different without it.

We've taken to calling him Kent.

He lives with his elderly mother, a sweet woman who wonders why the neighbors aren't more friendly. His hair is a spiky shock of white and gray over round, startled eyes. Hers is deep black, and her makeup is flawless. She is all crimson lips, powdered wrinkles, and sparkling purple eyeshadow. She owns the house. He owns the RV.

A few weeks ago a car pulled up, towing a camping trailer. It's not as big as the RV, but plenty big enough. The whites are whiter and the finish still retains some shine. Several times we've watched the vehicles dance; the RV pulling out and the trailer changing positions, the RV returning and nestling in to the camper's side like a pair of land Belugas.

We aren't sure who the new person is, male or female, but we've taken to calling him/her Kent Jr. Which brings me to yesterday.

When we first moved in, the single mom of five who owned the house before us stopped by one day to check for mail. She asked "Do you have young children? No? Well that's good because the guy who lives over there is a sex offender." She went on to describe how he'd invited her kids to watch movies in his basement. Her youngest are a set of 6 year old twin girls. They shared a bedroom at the rear of the house, adjacent to the back door which didn't lock. Her eyes were a mix of disapproval and glee, and the tween girl at her side nodded in collusion.

I took the news to Google, which confirmed its truth.

Wally Lamb's latest novel is called We are Water. A key construct of the plot is the sexual abuse of one of the main characters by an older cousin. The cousin's name is Kent. It is an intricately woven story, powerful and sad and satisfying in typical Wally Lamb style. A few weeks ago, I chatted with him a bit about the book and about this character. We talked about the difficulty of creating fully fleshed villains, and he said that it was hard to create humanity in Kent, but that he hoped he'd been successful.

Wally has volunteered in a women's prison for nearly two decades. He teaches writing, and has read a lot of stories written by the inmates. He cites a staggering percentage of sexual abuse among their histories. Through this, Wally has insight into the connectedness of victim becoming villain and the cycle that perpetuates. Insight which most of us will never have, nor would we want.

Yesterday morning the shuffling of recreational vehicles was underway again. I watched the camper being pulled by a black SUV, and called out "Kent Jr. is on the move!" The name became a running joke after Dolce and I read We are Water together. It gave us a way to name our discomfort and wariness without requiring discussion. But yesterday I felt ashamed of myself for saying it. For reducing this person, these people, to caricatures. No humanity was involved in the Kentishness I had created. No recognition of a tortured soul or a reformed mind or the simple presence of the very image and imprint of God. Just a caricature of a child abuser and his (imagined) partner in crime.

I'm still ashamed at the memory.

So Wally, if you are out there, and God, who I know is listening, please forgive me. And please be proud of me for my shame.

Today I will go back to that sex offender website. I'll find out my neighbor's name. And the next time I see him, I will say hello.