When is a drill not just a drill? 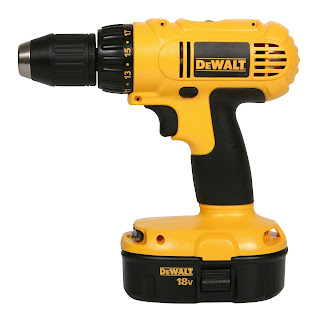 I've been thinking about drills.

Or more precisely, a drill: the DEWALT that we bought for DiDi when we first moved to Newburyport.

Normally I don't think about the drill. I just know it will make an appearance when needed. But recently it's been at the forefront of my mind.

You see, after a nearly year-long experiment in car free living, I put my neglected little champagne-colored Toyota back on the road last week. Part of that process was, of course, attaching license plates. And what holds the plates on?

So what did we need?


The plates went on with a bit of fidgeting and fuss, given that I was the one driving. (DiDi has mad drill skills, but it was a ceremonial occasion, and she wanted me to enjoy the moment.)

But here's what happened. After we went on our first joy ride, I couldn't find it. The drill seemed to have disappeared. The only thing I could think happened was that I left it in the road, a cloud of dust surrounding it as we peeled out.

It took me a bit to realize that it was gone, and then it took a bit longer to conclude that the search was fruitless. Meanwhile DiDi walked around with a sad face, and a tiny voice squeaking "My drill..."

I'm not going to lie. It was a little heart breaking.

I knocked hopefully on the neighbor's door, to see if they happened to find it. I considered posting a "Lost Drill" sign on the telephone poles on our street in hope that someone would turn it in. The sign would include a picture like the one at the top of this post, and a comment along the line of "Family misses it terribly."

It got me wondering, that sadness. DiDi's sense of loss. What was it about the thing that so connected with her? Why was it so important?

I thought about the function of a drill. It anchors things. It fixes things. It takes things apart.

It gives you power over the physical world, beyond what you would normally have. It provides a small measure of control over an uncontrollable universe.

I should explain that DiDi is dealing with severe nerve pain that has lasted more than six months. She walks with crutches due to muscle weakness and shooting pain which causes her leg to buckle. For any kind of distance, we use a wheelchair. She is way too young for this level of debilitation, and is frustrated.

If we had lost the drill a year ago she would have been sad. But not quite this sad.

The good news is that the miraculous happened. The other day, I opened the hatchback and shifted around some of the stuff that accumulated in the back when the car was off the road and acting as a storage locker. Can you guess what I found?

It was a happy day indeed.

So I've been thinking about this particular piece of multi-functional equipment. And I came to a conclusion.

Sometimes a drill is not just a drill.