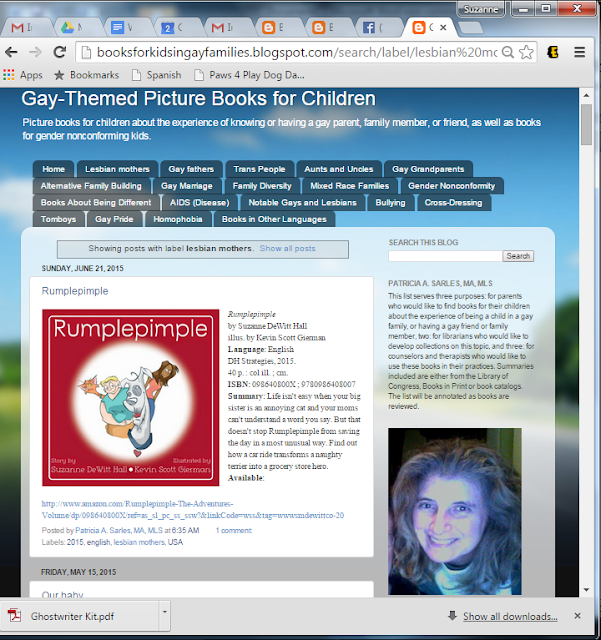 Patricia Sarles, MA, MLS has put together an extraordinary resource; a virtual library catalog of books for children related to various LGBTQ issues. When I discovered that my book, Rumplepimple, had been included in the list I was first thrilled, and then intrigued. I decided to ask her a few questions about how the whole thing came about. Here are her responses. I think you'll find her story fascinating.

How did you get started with this effort?

I am a librarian and I became interested in children's books on the topic of assisted reproductive technology when a social worker colleague, who is a fertility counselor, asked me if I could find her any books on this topic. I thought this would be very easy because of my training in how to find information on basically any subject. My colleague, Patricia Mendell, already had a small library of children's books on this topic so I started with those by searching for those titles in the Library of Congress catalog and discovered that very few, maybe two or three of her titles, were available in their catalog. In addition to that, they had very strange subject headings, like "infertility -- juvenile literature" or "test tube babies -- juvenile literature" and those subject headings were inaccurate because that's not what the books were about. They were about children conceived via assisted reproductive technologies and about donor offspring. It became apparent to me then that these books would not be easy to find after all. It was also obvious that there were no appropriate subject headings for books on these topics.

This intrigued me tremendously because I was now on a mission to find books on a topic that had no adequate subject headings. This meant they would be nearly impossible to find. But I still wanted to find them. I also knew that there were mothers and fathers out there who needed children's books like these in order to share with their children how they came into the world. There was a need for these books but no means for a librarian to find these books should a patron walk into a library and ask a librarian to help them find these types of books. That's when I started my blog.

How long ago did this take place?

My search for these books began in 2003 when I first met Patricia Mendell but I did not start my blog until the spring of 2009. I started with Patricia's small collection and then added to it as I unearthed (and by unearthed I mean I crawled under rocks to find them) more books on the topic. What started as a collection of about 15 books in English in 2003 has now turned into a collection of about 240 books in twelve languages so far in 2015! So how did I find these books that were not part of the Library of Congress collection and/or had no appropriate subject headings? I began scouring self-publishing catalogs, and began scouring the Web doing Google searches.

I've also learned terms in multiple languages, like Spanish, French, Italian, etc. and do regular searches in those languages as well. And now that my blog has been out there for a while, people who write these books also write to me to tell me about their books and I have discovered several this way as well. Since I have searched for these books in English and in so many other languages, I am safe to say that I am the only person in the world who maintains a collection of these books and since I share these books with Patricia Mendell, together we have the largest private library on these titles in the world. It is my hope one day to donate these books to a university or medical library, catalog them, and add them to WorldCat so that these books are findable for librarians around the world. It is also my hope to get the Library of Congress to create adequate and appropriate Library of Congress subject headings for these books so that they are appropriately cataloged.

You obviously find the LOC subjects lacking. What have you done to try to bring about improvements?

So your work initially focused on assisted reproductive technology, but it branched out to include LGBT issues?

In the fall of 2009, I started my Gay-Themed Picture Books for Kids blog, when again, my social worker colleague asked me for a list of children's books for her gay clients who used third party reproduction to build their families. Third party reproduction would include the use of sperm donation for lesbian couples and egg donation, surrogacy, and IVF for gay couples. An organization she is involved with, the non-profit Path2Parenthood, formally the American Fertility Association, and an inclusive organization which helps couples, both gay and straight, build their families through third party reproduction, was looking to build a booklist for their gay clients on this topic. I wanted to help, again because I am a librarian and I just love to research things, and so I began my gay-themed picture books blog. There I set out to collect a list of gay-themed picture books for children. I started with the lists already in existence, the COLAGE list, the American Library Association GLBT Round Table list, and there are others, and I began to build my own list. In the case of Library of Congress subject headings, gay-themed books are so much easier to find. For example, the subject headings make much more sense:

As with my Books for Donor Offspring blog, I search for gay-themed books in multiple languages and I believe I have created the most comprehensive list on the Web. I have found over 500 gay-themed picture books in thirteen languages.

Tells about your work as a librarian. How long have you been at it? Where do you work? Do you specialize in books for children?

I've been a librarian since 1990 and graduated from library school in 1991 so have been at this for 25 years. I do not specialize in children's literature at all! Even though I am currently a school librarian for grades 6-12 serving three small schools in Staten Island, New York, school librarianship is not what my training was in. I am a former medical and college librarian and that's the type of librarianship I was trained in and it is the type of librarianship I hope to get back into when I retire as I would like to popularize these books to make them more accessible to librarians around the world and I cannot do that in my current position. Ironically, I have no particular interest in children's literature, have no coursework or training in children's literature, but got into this subject because I was intrigued by finding things that were impossible to find. And in this case, it just happened to be children's books on assisted reproductive technology that I stumbled upon. Outside of this topic, I have no other interest in children's books.

Your websites list your email address as "Tovahsmom". Do you mind telling us who Tovah is?

In 2003, my partner of 23 years and I went through the process of artificial insemination in order to build our family. This is how we came to visit a fertility counselor and how we met Patricia Mendell. Unfortunately, our attempt did not take and we did not become pregnant so we never had children. Tovah however is the name of one of our dogs who passed away in 2013.

Thanks for sharing this very personal part of your story, Patricia. And thank you for the work you are doing on behalf of all the families who want books for their children which reflect their personal reality. Your donation of time, thought, and efort for the sake of others is inspiring.