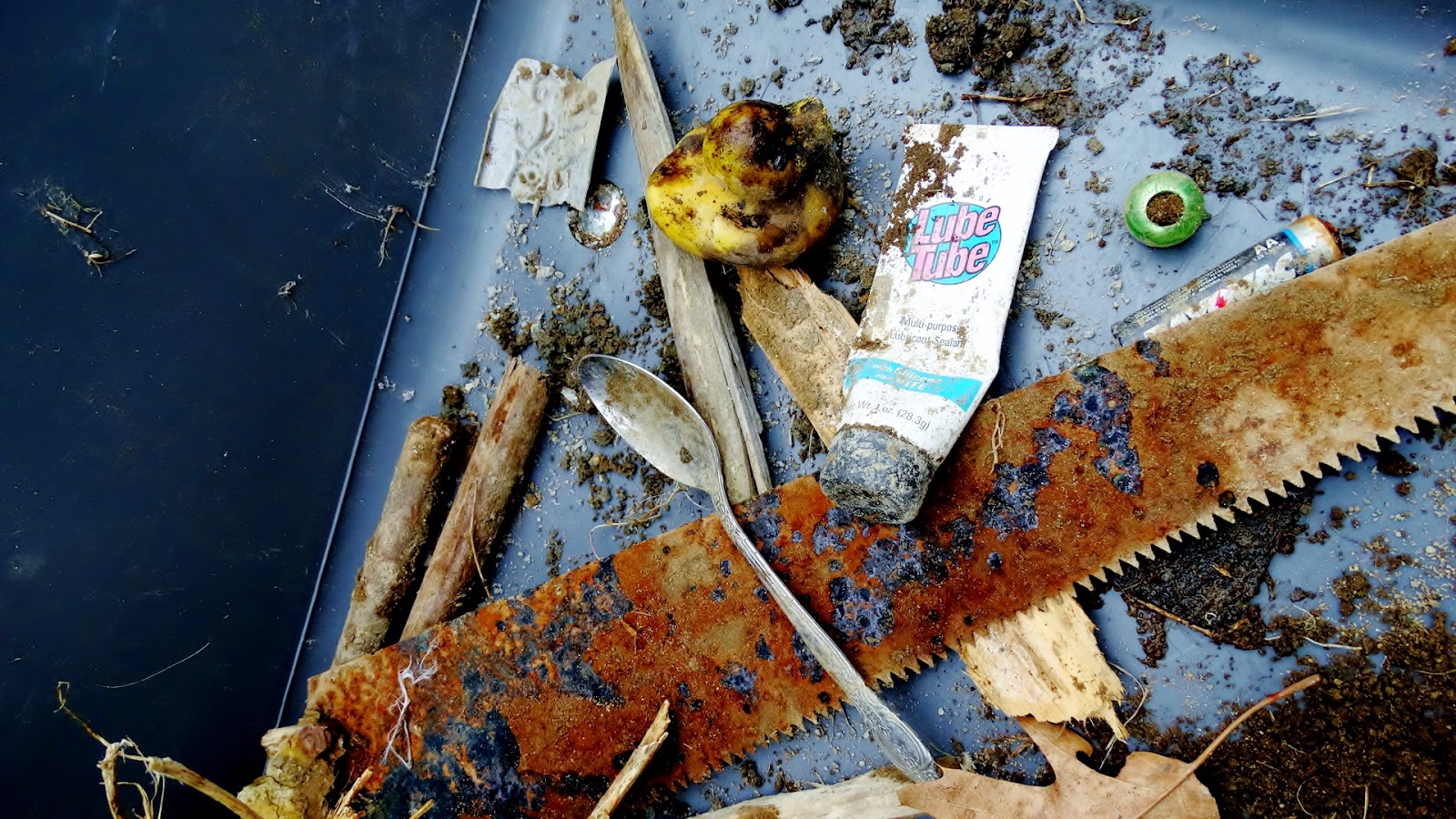 Yesterday I went outside to untangle Charlie and help him reach the dirty ball resting in the grass barely a breath away from his nose. His unreachable-ball yelps summon me several times a day.

He loves his new yard. Sometimes I look out to see him sitting on the slope of the small hill. Just resting. Watching. Listening to birds and traffic. Sniffing for neighboring dogs. But most of the time he is in motion, pouncing his torn soccer ball, or tossing a muddy tennis ball and chasing it as it bounces away. He knows the full extent of his run but lengthens it when necessary, pulling like a draft horse till the cone of cement that should have stayed in the ground where I poured it drags along behind him. He strains and pulls in the thrill of the chase.

The yard is littered with fragments of the soccer ball's exterior, along with windblown sticks and acorn caps. Most of the surface-level garbage is gone; we harvested repeatedly last summer and fall, and the retreating snow made the job easier in April. The other day we dug up jutting rocks and loose pieces of rotting wood, uncovering a rusty saw blade, a strange, dirt and moss covered doll/animal cross breed, and a small white container labeled "Lube Tube". We've found broken segments of Lego and beads, plastic chip bags, rusty pieces of metal, faded Coke cans smashed into the dirt, 25 railroad spikes, and enough broken glass to envision our own Kristallnacht.

A single mom of five lived here before us. The youngest were a set of 6 year old twin girls. The eldest was a teenage boy named Eddie. One day the mom came home from her job at Walmart with new bikes for the twins, and Eddie picked up a football size chunk of rock and took his rage out on one of them. Our neighbor Dave is always puttering around in his yard, so the little girl dragged the bike across the street to him in hope, asking "Can you fix it?" But one wheel was bent nearly in half and the frame was broken. There was no fixing it.

The moat of broken shards surrounding the house is Eddie's creation. We'll be picking it up for years. We worry about Charlie's paws when he digs his holes, covering and uncovering balls over and over again as if unearthing a new rodent each time.

We recently bought a bunch of marigolds, petunias, and red geraniums, along with two red outdoor chairs to match the front door. Painting the door was one of my earliest projects. I brushed the cheerful red over dents and dings and kick marks. I painted the rusty uprights that support the front porch roof silver. I painted the vertical face of the crumbling front steps black.

Our reclamation is slow, but steady.

Last year, Dave and another neighbor brought riding mowers over and took down the knee-high weeds and grass. Their relief at our having moved in was voluble. A week ago Dave gave us an 8-year-old push mower, in immaculately maintained condition. For several weeks before this gift, I'd look out the kitchen window while making coffee each morning, watching the robins pecking around and wondering how much longer it would be before we'd have to deal with getting the grass cut.

I've mowed before, at other houses, but it was generally my husbands reluctant job. When my son grew tall enough, the task shifted to him. Those yards had been purchased in both of our names, but within that turbulent and dysfunctional marriage, there were very few things that felt like mine. The property we owned together wasn't one of them.

But I bought this house on my own. I depleted my retirement savings and took an incredible tax hit, but this house feels like mine. Dolce and I have made every selection together and worked side by side to make it habitable and interesting. When we look around at the end of the day, at all that has been accomplished and all that remains to be done, we feel pride and connectedness.

Today we'll go to Walmart and get a gas can. We'll stop at a service station and fill it up. I'll make another careful circuit of the yard to pick up stones that might ruin the mower's blade.

Dolce will transplant the marigolds.

And I will mow our yard. For the first time.
Posted by Suzanne Marie DeWitt at 4:57 PM